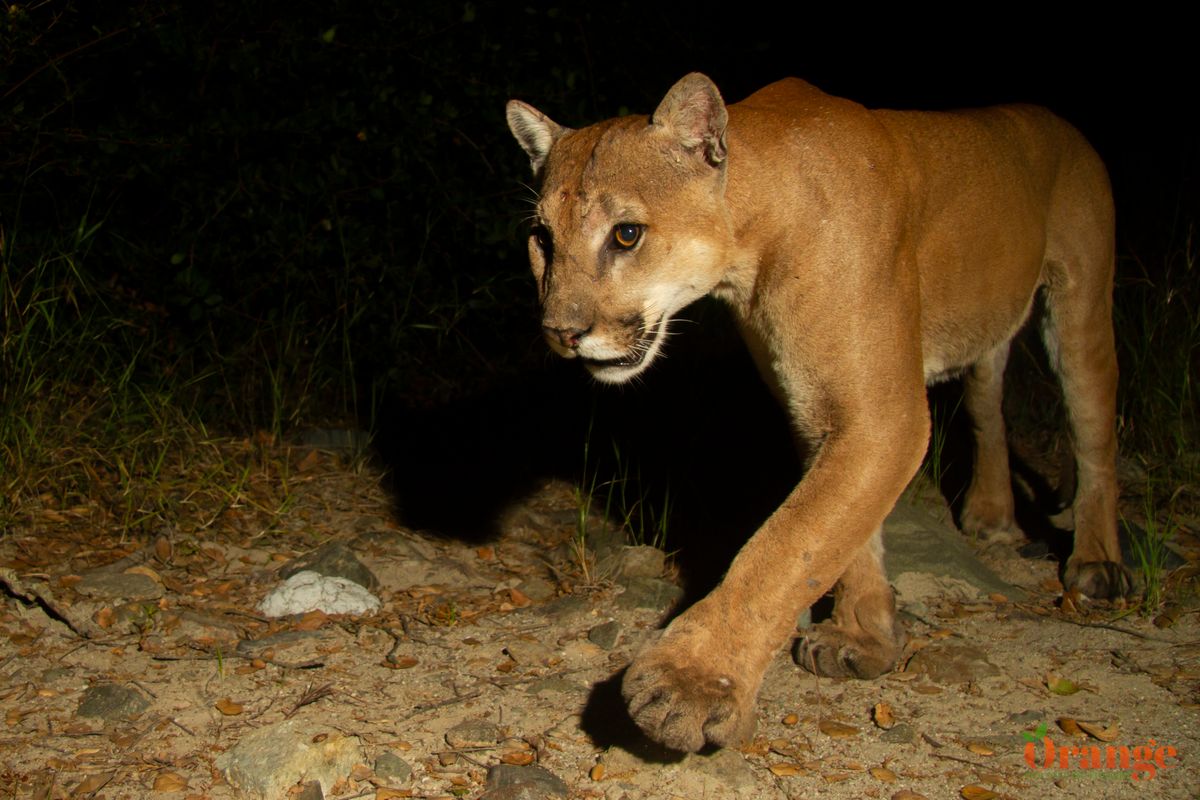 Mountain Lions can be found in Orange County throughout the Santa Ana Mountain Range down to the foothills and canyons directly connected to them. Population estimates are thought to be around 20 individuals which is considered caring capacity based on the amount of land and prey available to them. Although mountain lions do give birth to several kittens each spring, their population is not increasing due to vehicle collisions, rodenticides, and loss of habitat. These big cats play an extremely vital role in the ecosystem by keeping deer populations in check which keeps a balanced ecosystem for all animals.

They are often confused with bobcats which are our second largest native cat. Mountain lions have long tails that reach the ground compared to bobcats which have stubby tails. Bobcats can be found in many open areas even in between urban areas while mountain lions are primarily only in the wilderness areas connected to the Santa Ana Mountains. These mountain lions face an uncertain future as they lack the DNA diversity since they are land locked and cannot interact with other mountain lions besides the ones already here. Some research is being conducted by biologists from UC Davis which studies their population, movements, and more.

There has only been 1 confirmed mountain lion sighting on the coastal side of I5 since around the 1970's or 80's, that info can be confirmed with any local park ranger. We do get photos/videos sent to us claiming to have witnessed a mountain lion but it is almost always a bobcat or sometimes even a house cat. National Geographic recently published an article about why people mistake bobcats for mountain lions so often.

For more information about the mountain lions of Southern California, visit CA Mountain Lions which has been created by biologists from UC Davis 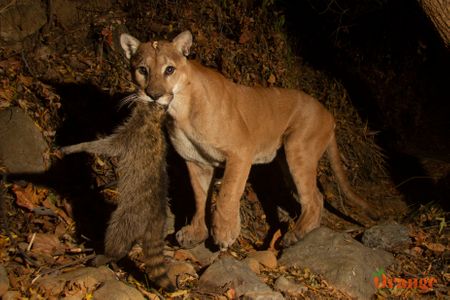 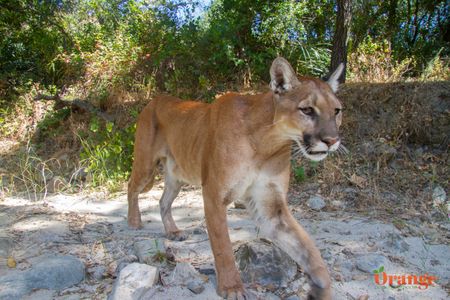 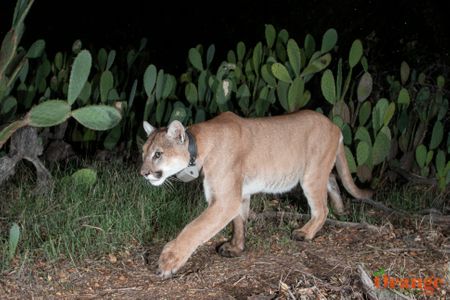 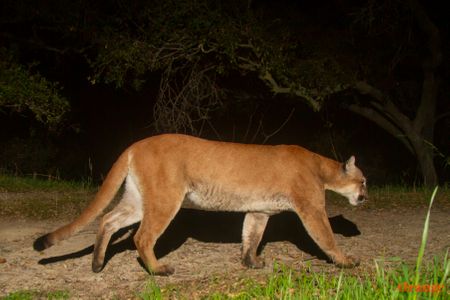 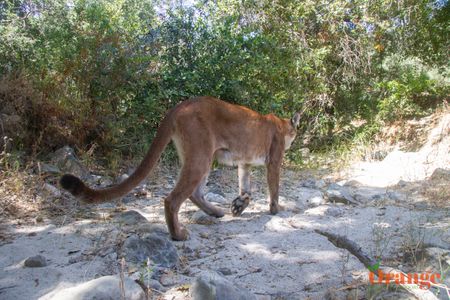 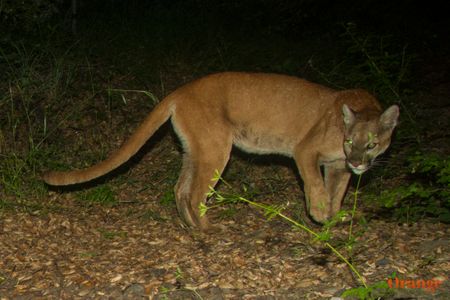 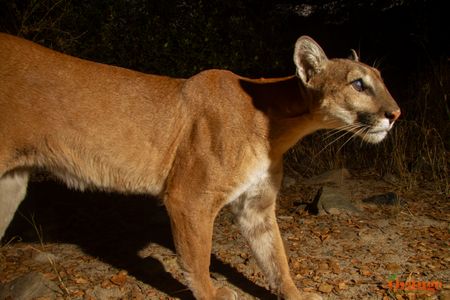 Typically these cats are very reclusive and hide from humans but there could be several factors in which an encounter with a mountain lion would happen. Mountain lions are active mostly at night but they are not strictly nocturnal so they can be moving around during the day as well. Mountain lions absolutely do not seek out humans as food, it is not something that's ever been documented. Attacks on humans are very rare and typically involve incorrect behavior by humans. The last several attacks by mountain lions in Orange County could have all been prevented if the people were more knowledgeable about these animals. Keep in mind, you are entering their habitat so it is up to you to educate yourself and be aware that they are around. When a human gets attacked even when it's our fault, the outcome is almost always bad for the mountain lion.

Just like how humans defend our own babies, mountain lions will defend their kittens from possible threats like humans approaching them. This type of attack would typically show the adult female mountain lion trying to scare the intruder away so you might see growls and stomping trying to fend of the human.

If you approach an area where a mountain lion recently killed a deer or some other animal, the lion will defend that kill from other potential threats including approaching humans. Keep in mind, mountain lions can't just go to the store and get food like we can. The kills are sometimes very few and far between so their recent kill might been the first time they've eaten in a while.

Mistaken identity may play a role in some attacks which is why you should never crouch when you're alone and never allow children to get away from you. You don't want to listen to music because you need to be aware of your surroundings. Young mountain lions may not be as familiar with exactly what they're supposed to hunt so if they see something running, they may assume it's prey and they're supposed to attack. This is what their main prey does, deer will typically run when they sense a mountain lion nearby.

Here are some basic instructions if you encounter a mountain lion

1. Never crouch, if you must do so to fix a bike or tie a shoelace, make sure someone else is with you that stays standing up and alert, mountain lions prefer to attack from behind on the neck.

2. Never run, you may make the lion assume you are running from it which will trigger its instinct to attack

3. Never use any kind of audio devices over or in your ears, always be alert of audible movement around you

4. Stand your ground but do not approach or instigate any kind of threat that may cause the lion to defend itself, make yourself appear larger and talk loud and confidently while backing away slowly, do not turn your back to the lion.

These are some recommendations while enjoying the local outdoors, remember that they prefer not to have anything to do with humans but if we place ourselves in what's left of their environment, then we must educate ourselves. These are wild animals and are unpredictable and they deserve the utmost respect.

What to do if you encounter a mountain lion

The difference between cat and canine prints is the lack of nail impressions on a cats print due to the ability to retract their claws when walking, whereas canines cannot retract their claws leaving nail impressions. Cats also have wider pads with 2 upper lobes and 3 lower lobes whereas canines have a single upper lobe and 2 lower lobes. Just because you see a large print does not mean it's a mountain lion print although it's easy to believe it is, there are some large coyote prints and also some large domestic dog prints that can easily be mistaken for mountain lions based on size alone. Mountain lion prints are generally around 3"x3" and some change while some domestic dog prints can be over 5" 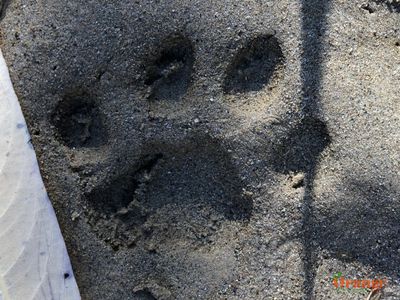 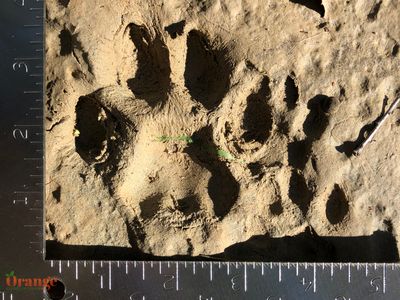 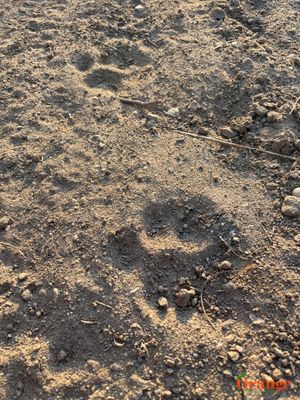 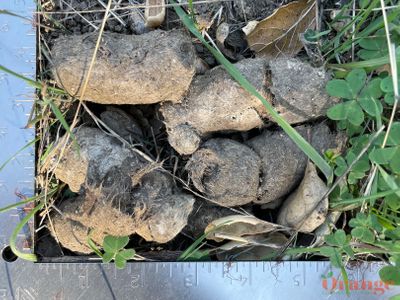 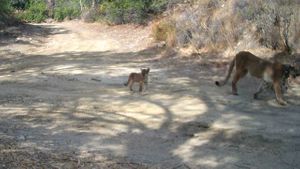 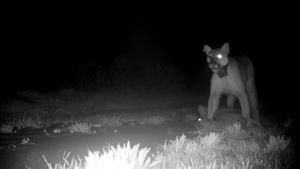 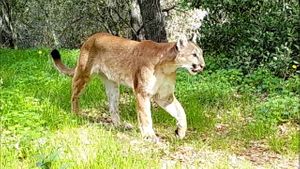 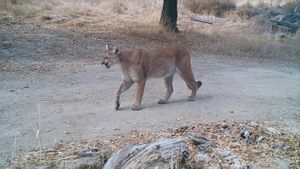 Email mark@orangecountyoutdoors.com with a photo of the animal print. If possible, place something next to the print for size comparison like a coin or car key