Once in a while a mountain lion will stray away from their "known" range in the mountains and show up on someones security camera in a residential or business area. It's typically younger males that have recently left their mothers side and are trying to find new territory. These cats don't understand our ways of life and the dangers that human civilization pose to them. These sightings sometimes tend to be in places where people don't expect mountain lions to be, making it a surprise. Previously, there has not been a mountain lion sighting documented on the coastal side of the 5/405 freeways in Orange County in at least the last 30 years or more since OC has been so developed. While mountain lions of course used to roam all the way to the coast, it would simply be very difficult for them to get there, crossing freeways, streets, and roaming through residential neighborhoods. 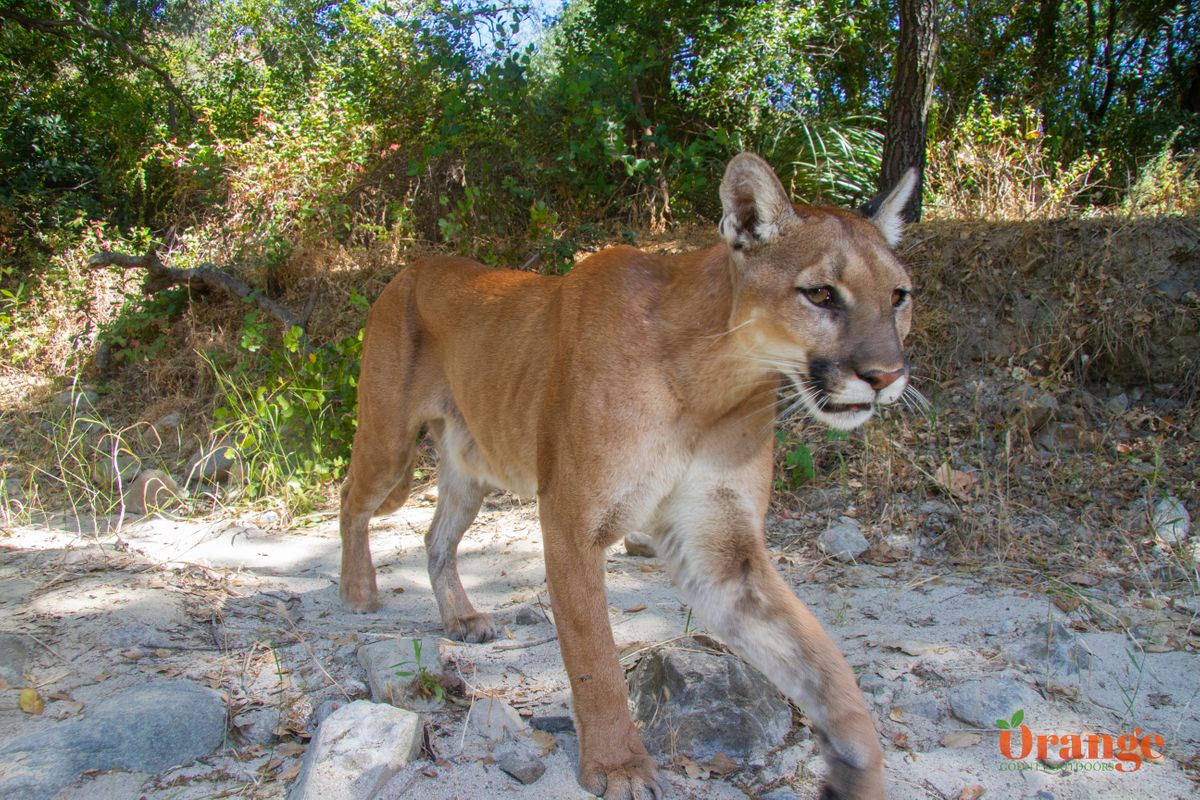 On 4/26/22, a mountain lion known as M317 seemed to have made his way into Aliso And Wood Canyons Regional Park in Laguna Niguel/Laguna Beach. This is quite the feat because this young male mountain lion managed to do it without getting hit by vehicles. While there have not been photos of him there yet, a GPS collar that is attached to him gave away his whereabouts. He was collared a few months ago after he roamed into a business area in Irvine where he was trapped, fitted with this collar, then released back in the Santa Ana's. This study of mountain lions in Orange County is performed by biologists at UC Davis in an effort to help them survive by knowing their whereabouts and proximity to humans. This mountain lion is now roaming through a new territory where no other mountain lions have been known to exist. There's no telling how long this lion will remain in this area that is completely surrounded by development. Since Laguna Niguel and Laguna Beach has not had a confirmed mountain lion sighting in at 30+ years, this lion might be able to make for easy meals since the prey animals have not had to fear any animals previously. There is prey for him like deer, raccoons, and other animals. They are not known to prey on coyotes or bobcats which are also pretty frequent in this area and do not prey on deer.

What's also a little funny about this is that there are already reported mountain lion sightings in this area almost every day but they've always been confirmed as bobcats. It's extremely common for park rangers to get reports of mountain lions every single day but half the time, nobody presents any kind of proof (photos/videos/prints/scat/kills), the other half of the time people do get photos and claim that it's a baby mountain lion with its tail cut off. Typically the rangers will laugh it off and tell people their photo shows a bobcat. It's so common that ABC7 and OC Register did a story several years ago about a mountain lion being struck by a vehicle on the 73, the photos and videos of that incident showed a Caltrans worker picking up a dead bobcat with one hand. Now it will be hard to determine whether or not someone is actually seeing a mountain lion a bobcat but the only way to tell is by them getting a photo. Everyone seems to want to claim they've seen a mountain lion because it sounds cool but their sightings are actually very rare since they tend to avoid humans at all costs.

Will this mountain lion stick around in Laguna or will it traverse back into the Santa Anas? It is likely that this lion will be spotted in the near future based on the small area it has to roam here and the amount of people/civilization around. Only time will tell but but most likely he will not last long in this area.

This mountain lion known as M317 was spotted in an elementary school in Newport Beach, causing for panic among residents and school staff. Teachers did a great job by bringing all kids inside and placing the school on lockdown. Fish and Wildlife Officers responded as well as Newport Beach Police and Animal Control. They found the animal in someones backyard and tranquilized it then successfully moved the cat back in the Santa Ana's with no problems. This was ultimately the best possible outcome for this mountain lion.