A huge mountain lion strolls by 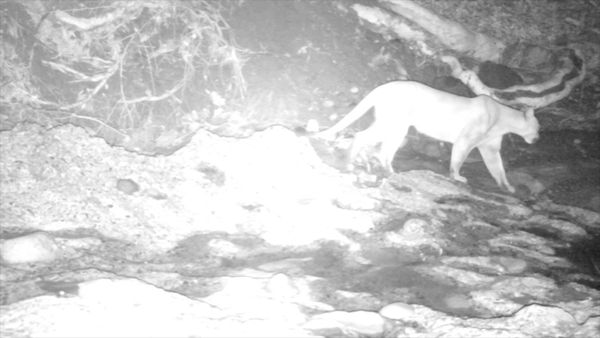 While checking the trail cameras in a secret location near Ortega Highway, I spotted large tracks that appeared to be from a cat based on the fact that there were no claws registered since cats retract their claws when they walk unlike dogs which cannot retract their claws and in turn always have registered claws in their tracks. I switched the SD card on the trail cam and plugged it into the laptop where I noticed a mountain lion! I was very excited as this was a different mountain lion than the one I've spotted other times in the area, this on was huge! It's thought that mountain lions in Orange County can get up to 160 lbs. which is a little smaller than mountain lions in other parts of the country also known as puma or cougar, that is mostly based on their diet and availability of prey which mostly consists of deer, this one appeared to be possibly closer to 200 lbs. but that is easy to miscalculate just by looking at video especially an infrared video. I'm hoping to get more images of this cat. In Orange County and the Cleveland National Forest, mountain lion populations are in the decline as well as our native mule deer. Some hunters believe their own story to convince others that animals need to be "controlled" which is obviously an uneducated joke, nature takes care of itself and if hunters want to hunt, that's great for them, the benefits of hunting are having fresh unaltered meat unlike what you get from a grocery store which we the consumers have to idea where it came from and what has been injected in it. As for these cats and deer, they both need to stick around as they play an extremely vital role in the ecosystem. Mountain lions are not really considered a threat to humans as they tend to ignore them, it is extremely rare that a lion would attack a human so there is no need to fear them but it is smart to become educated about them before you enter their home, running, squating, or venturing solo are obviously some of the main things you never want to do as a safety precaution.

Mountain lions are facing a dilemma here in Orange County as well as other parts of the Cleveland National Forest, habitat loss, introduced rodenticides, toll roads/highways, and inbreeding which are all accounting for a decline in their numbers according to studies by the U.S. National Forest Service as well as declining populations of mule deer. These big cats are dying faster here than in places that they can be legally hunted so it's important to take care of the remaining cats. I hope that my photos and videos can be used for educational purposes, if you would like to use this video or any other similar videos/photos for educational purposes, feel free to contact me.